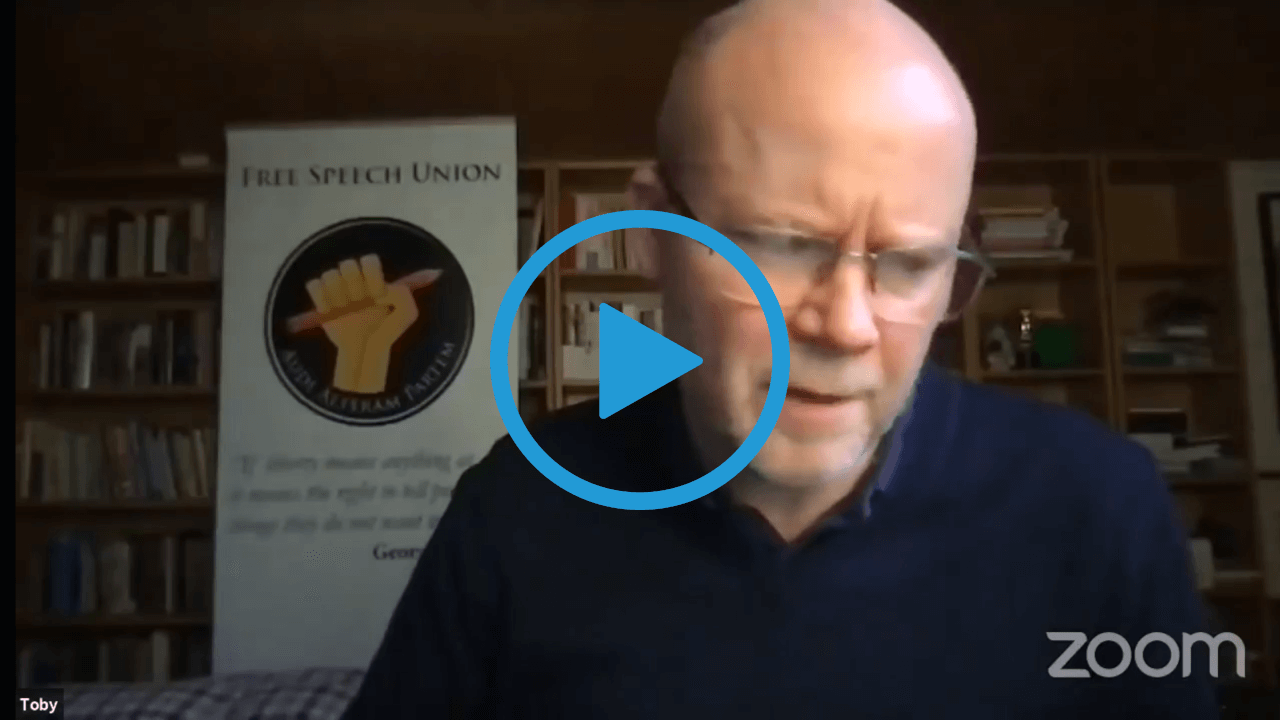 Toby Young is a British social commentator, the general secretary of the Free Speech Union, editor of Lockdown Sceptics, associate editor of the Spectator, the oldest weekly magazine in the world, and the London associate editor at Quillette. He graduated in Philosophy, Politics and Economics at the University of Oxford, and has since worked as a journalist, writer, and activist.

He has been a loud critic of lockdowns since March, particularly in the light of negative economic impact and GDP drop. In June of this year, Toby Young founded the Free Speech Union, a public interest body that challenges political correctness and helps protect individuals being punished by their work or university for deviating from what he calls “woke orthodoxy”.

I think in the case of Big Tech, social media platforms, I do rather like the proposal of the Trump administration to remove all the exemptions that social media companies currently enjoy from legal redress because they are classified as essentially telecommunications companies.

I quite like that idea, I’m not a great believer in regulation. And one of the difficulties, one of the many difficulties with state regulation of the internet, is that the regulators will invariably be left of center.

And so political bias will creep into the regulation. And that’s one of the things that Free Speech Union is doing in England at the moment, is campaigning against the government’s proposals to create a fairly censorious internet regulatory regime, which it is proposing to do, and said it intends to do.

So they no longer enjoy all these legal privileges, which prevent people from seeking redress in the courts for the most part, if they feel they’ve been harmed in the way they’ve been treated by a social media platform. I do like the idea of changing that, so they are treated like publishers rather than telephone companies.

The portal through which I think the virus entered the private sector was probably HR companies [sic: departments], but not exclusively, HR departments.

So now we have a situation in which the conservative government wants to protect people’s rights, particularly their right to free speech, but the private sector doesn’t.

So frequently, as a condition of taking a job, particularly at a job at a large successful rich company with many employees, a condition is you have to sign up to the social media policy. And the social media policy essentially gives the company carte blanche to fire you. If you say anything on social media, even in a purely private capacity in which you’re not representing the company in any way, but if you say something that in their eyes brings the company into disrepute, which means anything remotely conservative, they are within their rights to fire you.

And the Free Speech Union, I think, is going to petition the UK government, perhaps without much success, but nonetheless petition them to pass a law whereby it makes it illegal for employers to penalize their employees for things they say, whether in the pub, in person, on social media, in a purely private capacity. Provided they’re exercising their lawful right to free speech, it would be illegal for the company to fire them for saying something that the HR department happens to disapprove of because it’s politically incorrect or because it descends from some tiny aspect of woke orthodoxy.

I mean, I guess, you know, since the Free Speech Union started in February, more than 7,000 people have signed up. In many cases they’re ordinary people who have been punished by their employer or by their university for challenging woke orthodoxy.

“I do like the idea of changing their status.

So they no longer enjoy all these legal privileges, which prevent people from seeking redress in the courts for the most part, if they feel they’ve been harmed in the way they’ve been treated by a social media platform. I do like the idea of changing that, so they are treated like publishers rather than telephone companies.”

So we had a huge upsurge in membership during the BLM protests in June, because lots of people who challenged the BLM narrative were immediately punished and in some cases lost their livelihoods just because they dissented from that particular point of view.

And you know, some of them work for public institutions and we can do our best to defend them and we have done. And in some cases successfully.

Some of them worked for charities and charity law gives slightly less protection than the laws that obtain in the public sector, but nonetheless that gives them some protection.

And then some of them work for private companies and that’s where they have the least protection.

And I think that you know, I have, I feel I have a kind of responsibility to our members, to people up and down the country, not just here, but in the US, across the Western world, whose rights, particularly their right to free speech, are being consistently persistently violated by their employers who have no compunction about trying to expel them from their companies, their institutions, just because they say something they disagree with, they say something unfashionable, they challenge prevailing orthodoxy.