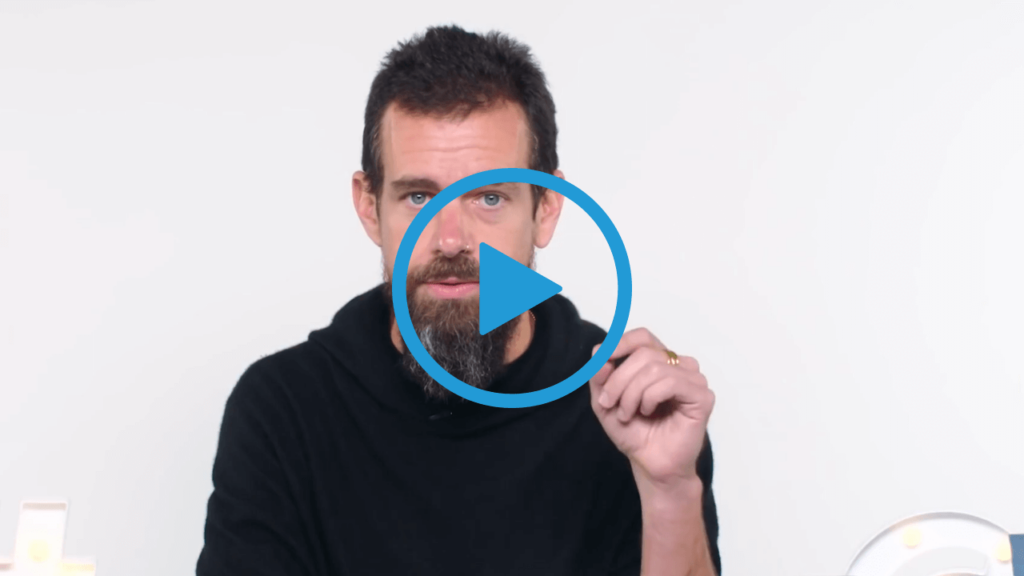 The above video, ‘Twitter censoring Harvard Medical school Professor Martin Kulldorf’ is trending today. I took a look to see what had been censored and it was the following simple Q & A exchange. 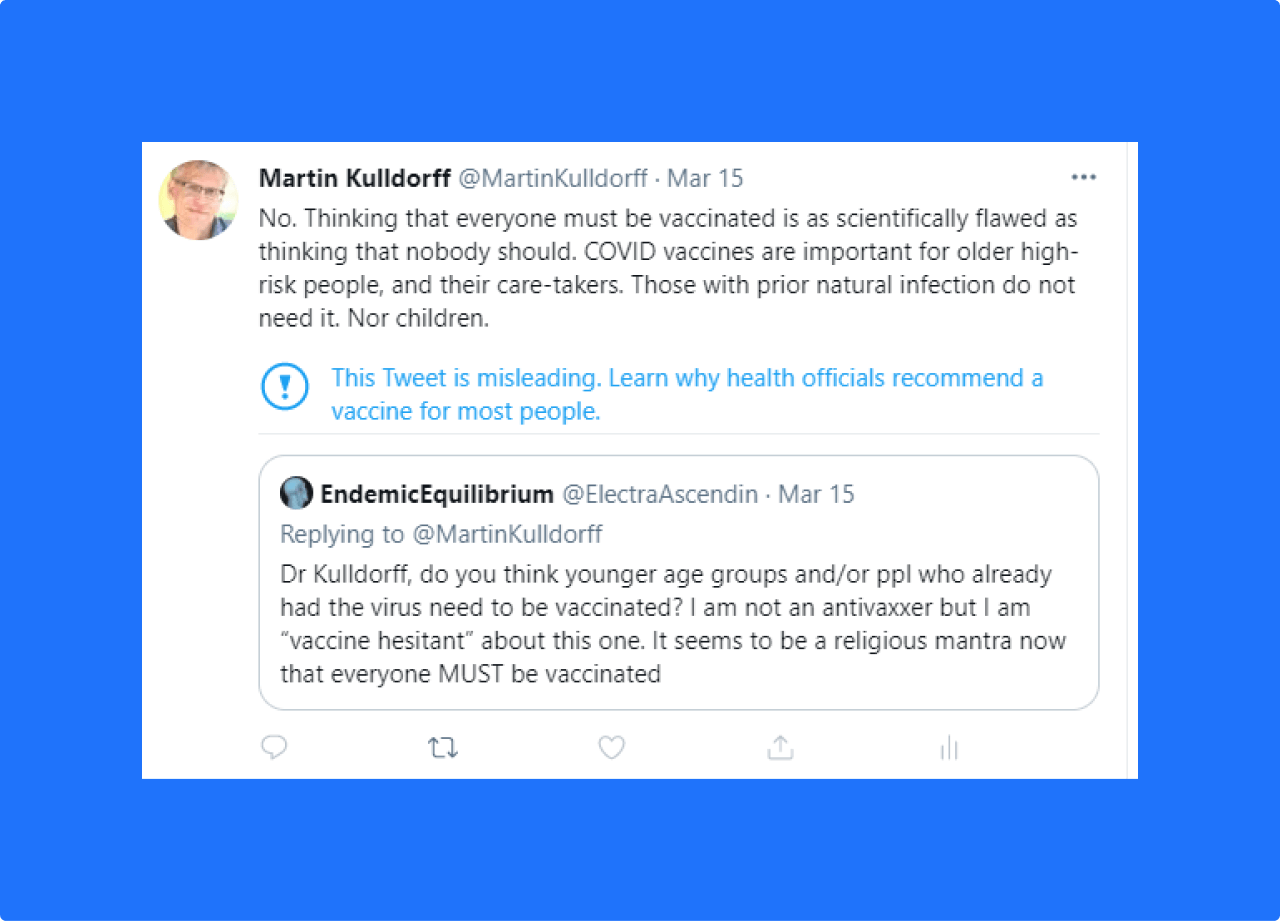 Since the start of the pandemic big tech has been aggressively censoring medical information, with a complete bias for Non-Pharmacological Interventions (masks, social distancing, lockdowns) also dubbed Non-Scientific Interventions. Draconian interventions exported from China last year that are not evidence-based and from which big tech derives benefit. Big tech censorship of therapeutics is costing lives.

As we’ve come to expect when big tech censors, it does not cite anyone. Nor does it offer any form of transparency into the decision making process. For anyone who has looked into it, it’s an American political censorship by proxy game. A grave danger not just to America, but to the world.

The other day Martin threw down the gauntlet.

It caught my attention in particular because I’ve been absolutely perplexed by mainstream media endlessly advocating  to vaccinate everybody. It made absolutely no sense.

I even caught Fauci recently on television talking about a road map to vaccinate babies! I was literally stunned.

Fauci had claimed that the Infection Fatality Rate (IFR) of influenza is ~0.1%. And the other day also, John P. A. Ioannidis, C.F. Rehnborg Chair in Disease Prevention, Professor of Medicine, of Epidemiology and Population Health, and (by courtesy) of Biomedical Data Science, and of Statistics; co-Director, Meta-Research Innovation Center at Stanford (METRICS), published peer-reviewed ‘Reconciling estimates of global spread and infection fatality rates of COVID-19: an overview of systematic evaluations, that stated “… the available evidence suggests average global IFR of ~0.15% and ~1.5-2.0 billion infections by February 2021 with substantial differences in IFR and in infection spread across continents, countries, and locations”. In other words it’s flu-like risk for the great majority of people.

Or put it another way, if you are worrying about it, stop, and if you must worry about something that could threaten your life, worry about forgetting to look bothways before crossing the street.

It’s even more odd because the age graduated risk is extreme, with the very elderly being at several thousand times more risk than young children. It just didn’t make sense to be introducing medical risk to children, let alone babies. Their risk of COVID-19 is negligible, less than that of influenza.

And why would healthy, non-elderly adults want experimental treatments for a flu-level risk? And if they were not already immune (e.g. existing cross-immunity), why would they not want to acquire “full spectrum” natural immunity instead? Most certainly for the young.

Plus, as with the flu vaccine, it’s not ‘sterilizing’. Immunity is not long lasting, mandating a yearly jab. The UK has already planned such a booster jab for those already vaccinated! 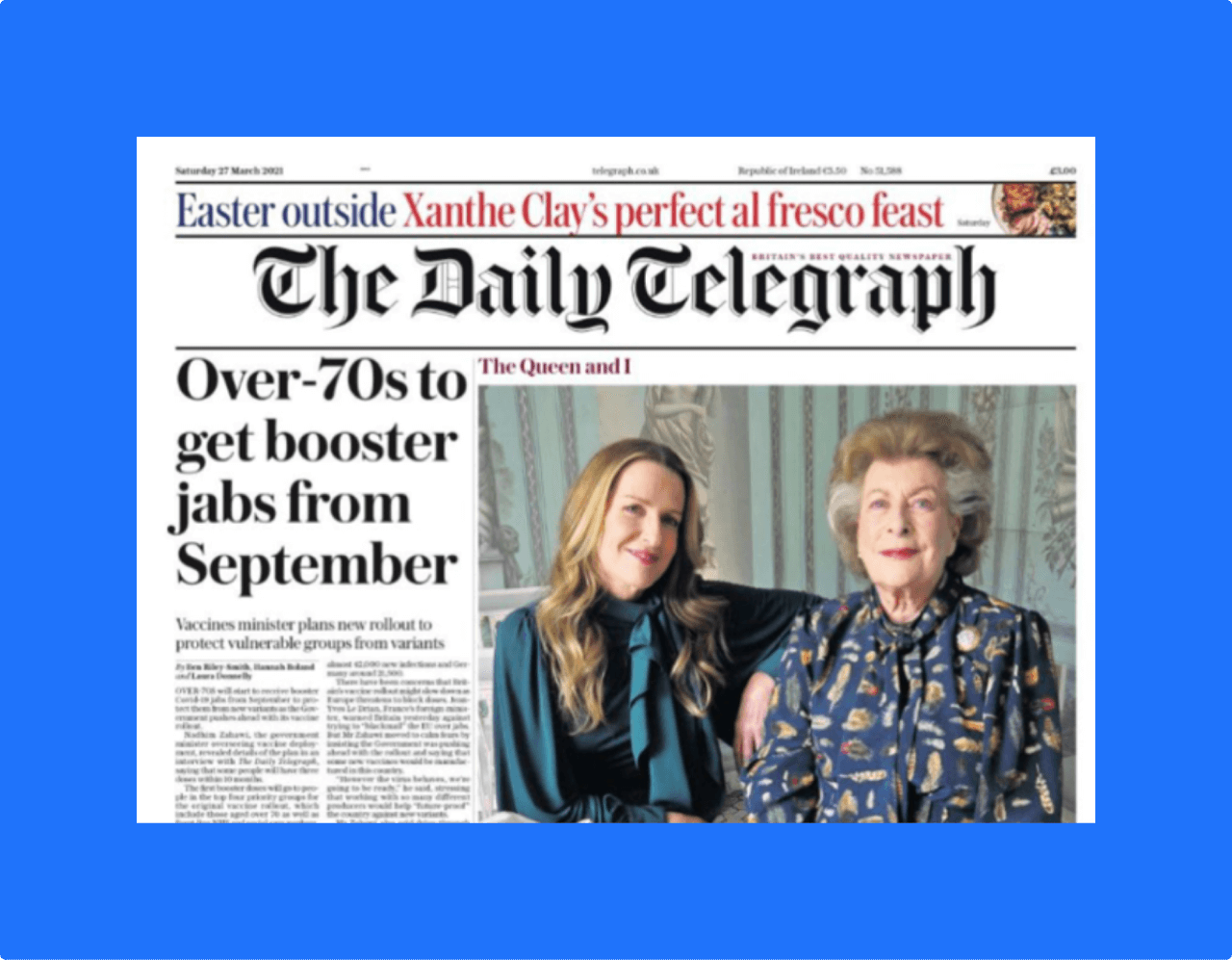 I was so perplexed that I asked around for a week, “why vaccinate everybody”? No one provided a credible response to substantiate vaccinating everyone as per the transnationally orchestrated mainstream media campaign.

I received a few, credible sounding responses that not everyone should be vaccinated from Dr Knut Wittkowski (Epidemiologist), Dr Byram Bridle (Viral Immunologist), and Dr Mike Yeadon (Former Vice President and Chief Science Officer for Pfizer) replied. You can read their professional biographies.

The first to reply was Dr Knut Wittkowski. Hyperlinks are mine:

The risks vaccines confer depend on the type of vaccine

While these AEs are rare, they exist and if the expected AEs are more severe than the expected illness from disease vaccination should be avoided.

Hence the following people should not be vaccinated:

Here’s my quick ‘two cents-worth’… One of the arguments for vaccinating everyone is to protect each individual from the potential of acquiring severe disease and possibly dying. This has been largely supported by selective emphasis of data that has scared many people. This includes things like failing to define the nature of ‘cases’ (i.e. asymptomatic, mild, moderate, severe, lethal); this would paint a different picture. An accurate presentation of the full spectrum of data set alongside the context of something like influenza viruses that everyone has a lot of experience with would help bring balance to discussions. A second argument for vaccinating those who are not at high risk is that it will prevent the least vulnerable from passing the virus to the most vulnerable. I.e. to use the least vulnerable as shields. However, for that to work properly, the vaccines would have to confer sterilizing immunity, for which there is no evidence that they can achieve this (most of the data shows that they are excellent at blunting the severity of disease). As a global community, I think we have ‘missed the boat’ on this one. Acquisition of herd immunity among low-risk people (the majority) while focusing temporary protective measures on the most vulnerable likely could have got us out of the ongoing cycle of lockdowns quite some time ago, and with fewer overall deaths.

and quickly followed up to my response to that with:

That’s the crazy part of this. If the vaccines don’t confer sterilizing immunity (and there is no evidence they do; in fact, quite the opposite), then the argument of risk of transmission to the vulnerable remains. In Canada, vaccinated individuals have to remain under lockdown, wear masks and maintain 2 meters of distancing just they had to prior to vaccination.

Dr Mike Yeadon gave the final response and shared his views in a broader context:

I second everything in Knut’s summary & of course the implication NOT to continue with the ill-advised plan to vaccinate everyone.

On ADE, I don’t think it’s understood exactly how it occurs, only that it has in the past and more than once.

I will now outline a strong reason not to vaccinate everyone, even supposing there was a perfect vaccine that harmed no one.

Furthermore, you’ll turn up when ordered to do so for your next “top up vaccine”.

Therefore I concluded that at least for now:

I still very much welcome input, either way. If you have credible reason/s to vaccinate everyone, please do reach out.