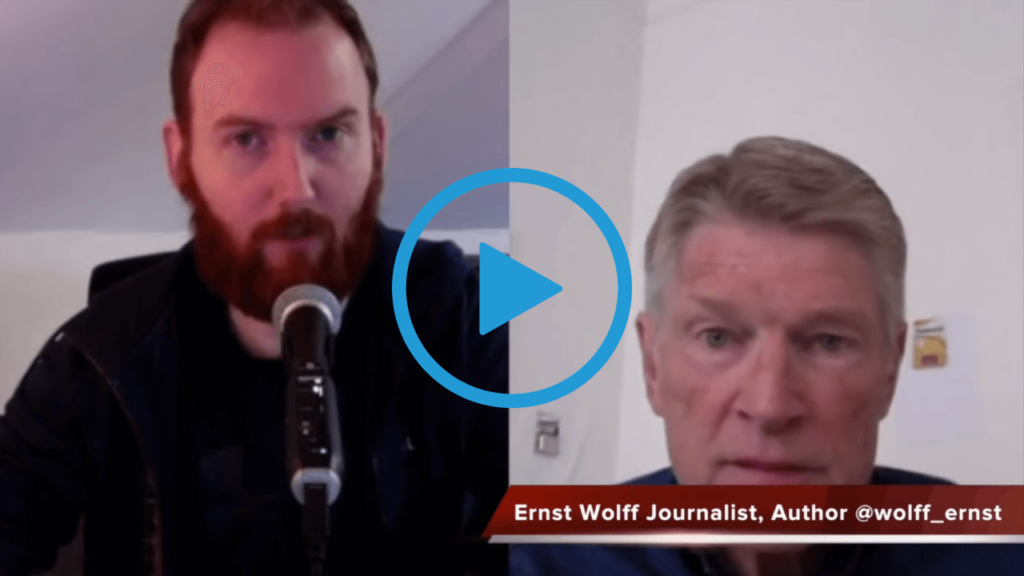 Ernst Wolff is a German author and journalist, whose expertise lies in the global financial and monetary system. He focuses particularly the role of the IMF, the World Bank, the Federal Reserve and the Bretton Woods system in the current economical situation.

The original interview is 16 minutes. I reduced it to 12 minutes. Please consider visiting Dave Cullen’s (the host/copyright owner) SubscribeStar.

Each separate clip transcribed and time-stamped below.

Yeah, the thing is that our financial system is 75 years old. It was founded in 1944 at the conference of Bretton Woods. And in the beginning, it actually worked.

The conference of Bretton Woods made the US dollar, the leading currency in the world and picked the dollar to go. And that system worked for about 30 years until the mid-seventies. And the big profiteers from this scheme was the big banks. They made a lot of money for about 30 years by handing out loans to big corporations.

But then in the middle of mid-seventies, we had a big recession and the banks were not making as much money as before. So they asked the, or they forced the politicians to deregulate the system, that is, they were forced to give banks more opportunities to make money aside from handing out loans.

So the first big crash came in 1998 when a hedge fund in New York collapsed, that was Long-Term Capital Management, and that hedge fund collapsed. And that would have taken down the whole system. If not banks had saved this hedge fund, that is it.

So the banks, in order not to have to pay this amount of money, they just bought up this hedge fund for about $4 billion and saved a lot of money that way and saved the system.

And then came the next crash. The next crash happened in 2007, 2008. And that time the amount of money that would’ve had to been paid was too much for the banks to handle. So the state stepped in, the state saved the system with taxpayers’ money, but that even wasn’t even enough.

Problem that we’re facing right now is that we have a system that’s unsustainable. And actually they tried to reverse their course in in between 2015 and 2018, because everybody in the financial system knew that you cannot just keep in injecting money and you just cannot keep lowering rates anymore.

So after 2015, the Federal Reserve started to reverse course, they stopped injecting so much money and they even started raising interest rates, but they only could do. They only did that until the until Christmas 2018, when they raised the interest rates, I think for the fourth or sixth time. And then the whole system came crashing, started to come crashing down because we saw the worst breakdown of the share markets at Christmastime 2018.

So after that point, everybody in the financial system knew that this system was doomed. And then the next catastrophe happened in September 2019. When the repo market in America, in the United States broke. The repo market is where banks get cash for overnight transactions. And that market worked for about 10 years, but then all over, all of a sudden on September 18th, it stopped working and the fed had to step in and the fed had to pump money into that repo market.

It was no longer sustainable, but the problem was that the hedge funds, they got into trouble this year and into really big trouble because the system then was hit by three big catastrophes.

If this was to all end, say tomorrow, the lockdowns, which unfortunately it is endurance, but if it was to, you would walk down your city streets and you would probably see in due course boarded up shop windows absolutely everywhere at this point. Small businesses are simply not going to be able to survive.

“So everybody in in the financial system knew that this system was doomed.

And what they’re doing now, right now, is they’re trying to exploit the breakdown of the system in order to make a lot of money in the final stages of the system”

Your small time coffee place is not going to survive, but Starbucks will, they have the billings to continue. Some people have said that this is the end of globalism as we know it. And I’m saying, no, no, no. This is actually as I think that the Corbett Report stated, this is more like the fulfillment of globalism in the end, because the only companies that are really going to be left, that are going to be able to survive this current crisis and who are then going to have a complete and utter monopoly on pretty much every market will be the large multinational globalist companies, right?

It’s exactly true. Amazon is one of the biggest profiteers.

And you will see that that companies like Booking.com, for example, will make a killing, or Takeaway, for example, all these small restaurants that have to be closed now, because they’re not allowed to serve food inside their buildings, they have to rely on these takeaway companies. And actually in Europe, you only have one company that does this, and that is Takeaway. That is situated in Amsterdam.

So it’s companies like these companies from the so-called share economy that are going to be the biggest profiteers from this crisis. And to show the parasitic character of these companies just take a look at Amazon. Amazon has not paid taxes for the past two years in the United States. They actually even got a refund of several hundred millions on tax payments that they never ever made.

A person like Donald Trump, for example, is not even half as mighty as the head of BlackRock or the head of Bridgewater. Those guys now push the world into a direction where they can control absolutely everything. And the world that we’re going to see in the future is going to be something like corporate fascism.

Yes. You’ve described this as a, I believe what, I don’t want to misquote you, a fascist financial coup that we’re seeing. Talk a little bit more about this, because I see this as the beginnings of a serious technocracy now in a major way.

“the world is being taken over by the hedge funds at the moment… more powerful than governments. They are taking over right now. The governments don’t matter anymore.”

Yeah. They had to have a scapegoat for all this, and they found their escape goat in this virus now, because they’re blaming it all on the virus and what you’ll be seeing during the next few months after the shutdown, after the lockdown is that everybody will tell you, well, this is the consequence of this big pandemic- but it’s not, it’s a planned thing.

So I think what we’re seeing is the world being taken over by very few people at the top of the big hedge funds.

Take a look at their reaction to the virus. Take a look at Donald Trump in the beginning. He said the virus, that was nothing that he would care about. He just ridiculed people that that talked about the virus. And all of a sudden, he goes along with the people that say this virus is really extremely destructive and has to be a, there has to be a lockdown in America.

“So I think what we’re seeing is the world being taken over by very few people at the top of the big hedge funds.”

So politicians in this crisis right now are driven. They’re not acting, they’re driven by the big players behind them. And that’s the Masters of the Universe. That’s the heads of the hedge funds. And we’re facing a phase of hyperinflation.

It’s going to start slowly, but because like now after the lockdown, you will have a lot less commodities in the markets, but you will have, because of these amounts of money that are being injected into the system, you’ll have a whole, a huge amount of money facing a very small amount of commodities. And that’s a recipe for inflation.

And the rational consequence of all this is inflation. And this inflation will soon go over into a hyperinflation. And then we’re going to see conditions like in Germany in 1922/23, or like in Zimbabwe at the end of the last century.

But that is also something that the big players in the system want because they’ve taken on more debt than ever before. And the only way to get rid of debt is by inflation. So inflation will rid them of their debt. And if they get into the pole position, when the restart comes, they will have gotten rid of all their debt and they will be able to start again. And they will be very, very powerful, more powerful than before.