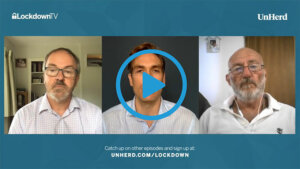 Freddie:
Let me go to Tom then. You’ve been studying these non-medical or these physical interventions for years. What is your view of the wisdom of requiring mask use among the wider community?

Tom:
Specifically on masks, there’s no evidence that masks, apart aside from people who are exposed in front lines or healthcare workers that masks actually make any difference, but that is extraordinary on its own, but what is even more extraordinary is that what I’m describing is uncertainty.

We don’t know whether these things make any difference.

These are non-healthcare worker settings, okay. So what does science usually do when there is uncertainty? Well, science deals with uncertainty by doing experiments like Carl described, randomized control trials.

Now the time for the randomized control trials was in February, March, in April. No longer now because the viral circulation is low and we would need huge numbers of enrollees to show whether, to know for certain whether there is any difference with mask wearing.

Freddie:
On masks though, I have seen studies that have been widely shared on social media that investigate on the, you know, on the kind of physical level how much a mask can reduce the spread of particles and, you know, there is evidence that masks work in that setting, isn’t there, even though there may not be evidence of the kind of, you know, sort of controlled sample style.

Tom:
Freddie, we’re dealing with some of the most slippery customers in the market. Respiratory viruses. It’s not just a question of the bug and the person, it’s also the setting. Which is why all these laboratory-based experiments with plumes, for instance, there are studies looking at the plume of droplets coming out of mask A versus mask B and so on, have to be treated with extreme care.

What we really should be doing is our experiments trials in the population and we have to do them when there’s virus circulating.

Freddie:
But isn’t it a matter of common sense to it at all? I mean, do you believe that wearing a face covering reduces the amount that a respiratory virus can be transmitted even though you may not have a population-wide study to prove it?

Tom:
The problem with that particular belief is that the one arm of a randomized control trial, which was published in 2015, so one one section of the people who took part in in a study in Southeast Asia wore cloth masks, okay, and they found that these cloth masks not only didn’t work but actually probably saliva and secretions and the wetness made them more permeable to incoming agents. So what I’m describing really is complete uncertainty.

Freddie:
From 24th of July in the UK, it’s going to be mandatory to wear masks in shops. It sounds… Would I be right in saying that you don’t think that sounds like a necessary or wise step or?

Carl:
Well, look – the job of evidence-based medicine is to inform decision, not to be the decision, and this is an incredibly important point that I think a lot of people don’t get when you’re actually in health care and actually they’re making decisions. So both Tom has been a general practitioner and at the weekends I still work as an urgent care GP.

Any evidence that you bring to the table will be mechanistic, will be weak observational evidence, which has been shown over decades to have flaws.

“ASIDE FROM PEOPLE WHO ARE EXPOSED ON THE FRONTLINES, THERE IS NO EVIDENCE THAT MASKS MAKE ANY DIFFERENCE”

So, by all means, people can wear masks or not wear masks. Policy can make the decision but what they can’t do is say it’s an evidence-based decision and I think that’s really important and there is a real separation, it seems, in my mind, the difference between an evidence-based decision and something which is becoming very opaque to me is science is we being led by the the science.

The science is the mechanism, the plume, but it isn’t the evidence so by all means wear or don’t wear your mask but the current evidence cannot reduce your uncertainty when it comes to the policy.