For months, Professor Devi Sridhar has been springing up on mainstream television (mostly British). Usually with the title of “professor of public health”, or, at least once that I recall, “epidemiologist”.

I’ve found her attitude and statements often to be unsettling and – overall speaking – not that likely to be true or accurate. I say “likely” because I have no formal education in public health, immunology, nor virology. But I can read an undergraduate textbook. That alone has generally been enough to conclude that she’s too-often misleading or mistaken. 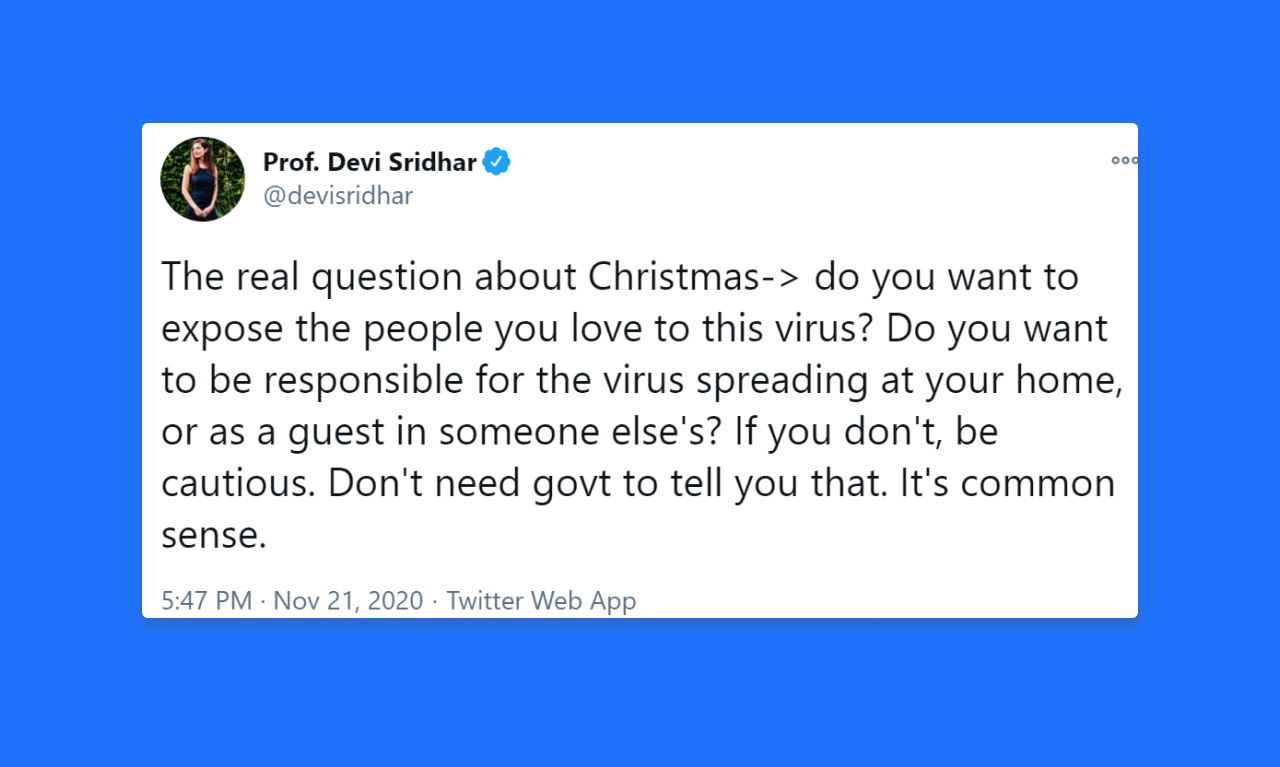 Where I couldn’t make such a quick determination, I pinged an actual expert for an opinion. That is, someone specifically qualified in the given area. On each of these occasions, I received a reply to confirm that Devi was unfortunately lacking in expertise and was indeed mistaken on the topic.

As a result, I’d parked her into my growing mental bucket of another dubious “expert” wheeled out to bolster mainstream media narrative/s, and didn’t pay much attention to her subsequent appearances.

However, this morning she appeared at the very top of my Twitter feed. Attempting to guilt trip the British nation into not celebrating Christmas! Or, if one was not of such moral fortitude as Devi and had to celebrate with their family, the Christmas household should be turned into something more akin to a mausoleum for “safety” reasons. All based upon her viral related fallacies! She followed it up in a second tweet adding a humanitarian frame along with “spiritual decor” – just for good measure! 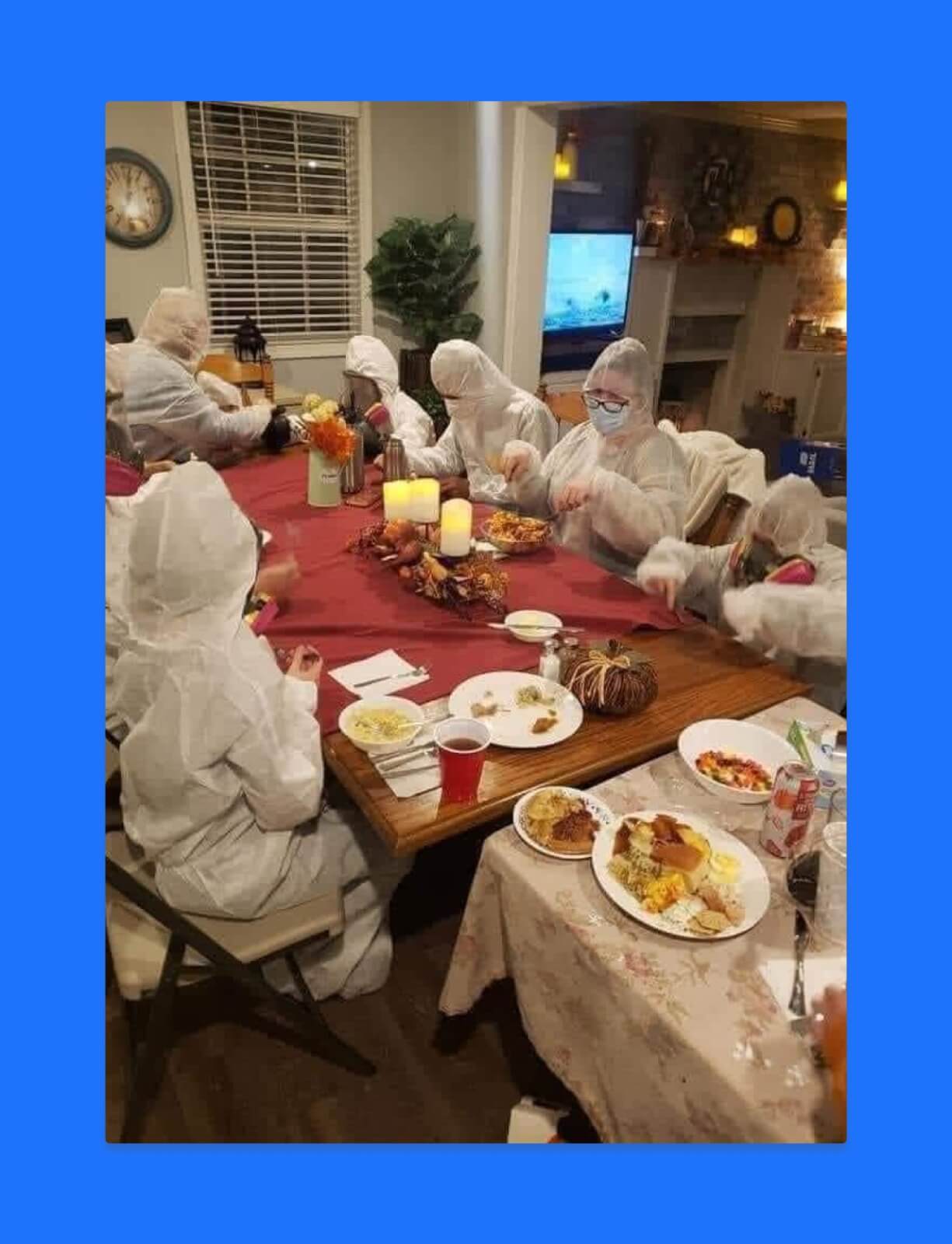 I was flabbergasted. But warmed quickly when I saw that Mike Yeadon (former Vice President Respiratory & Chief Scientific Advisor, Pfizer) was taking her to task – notwithstanding she’d blocked him! 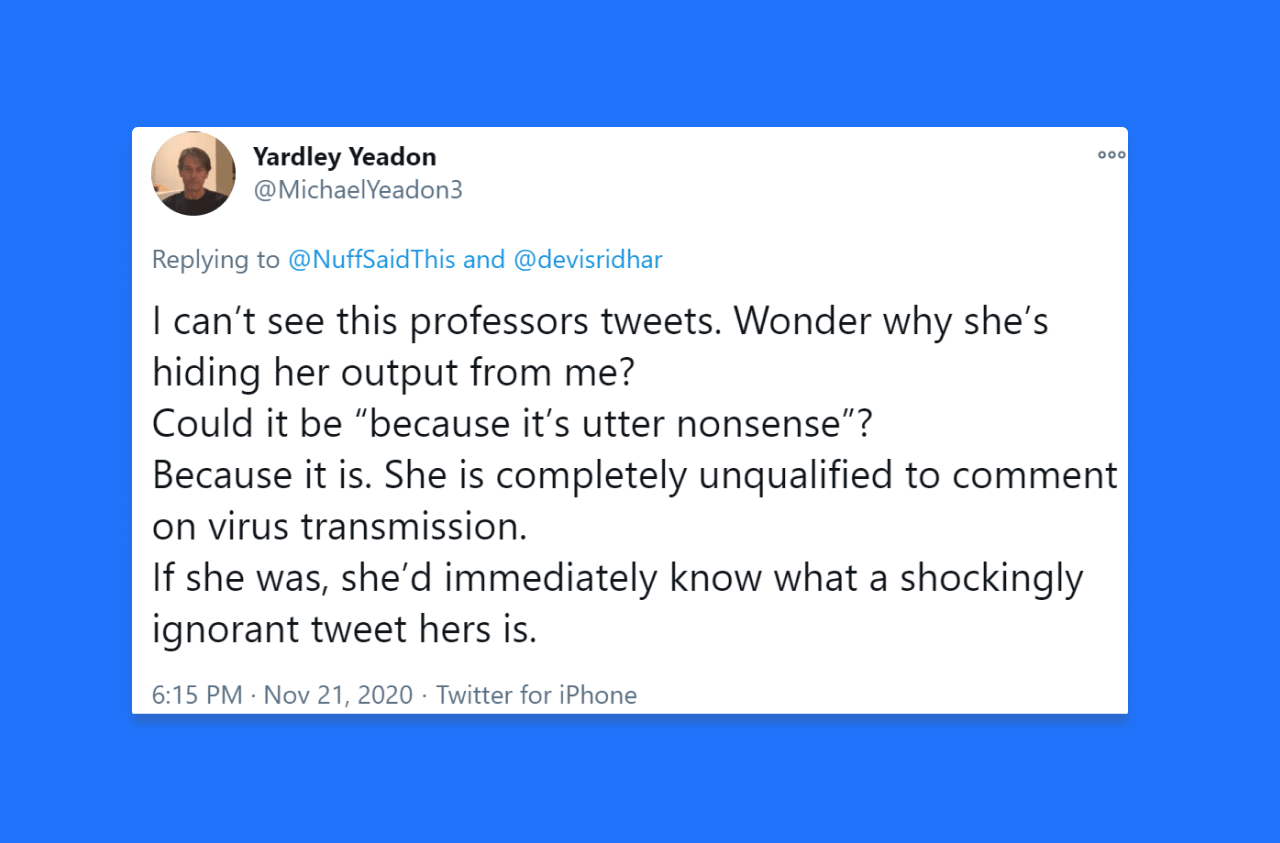 A computer programmer @kasaveri responded to Mike’s tweet with “Dr Yeadon – this lady has been misleading people and it appears orchestrated.”

It does appear that it could be orchestrated, owing to the level and consistency of her misleading appearances on both television and in printed press this year. Although to be fair, to the best of my knowledge at present, she may or may not be aware of any such orchestration.

After some further escalation, Mike took a swipe at her professional connections, and the failing of mainstream media to disclose them, when he retweeted @BmsMatrix with comments: 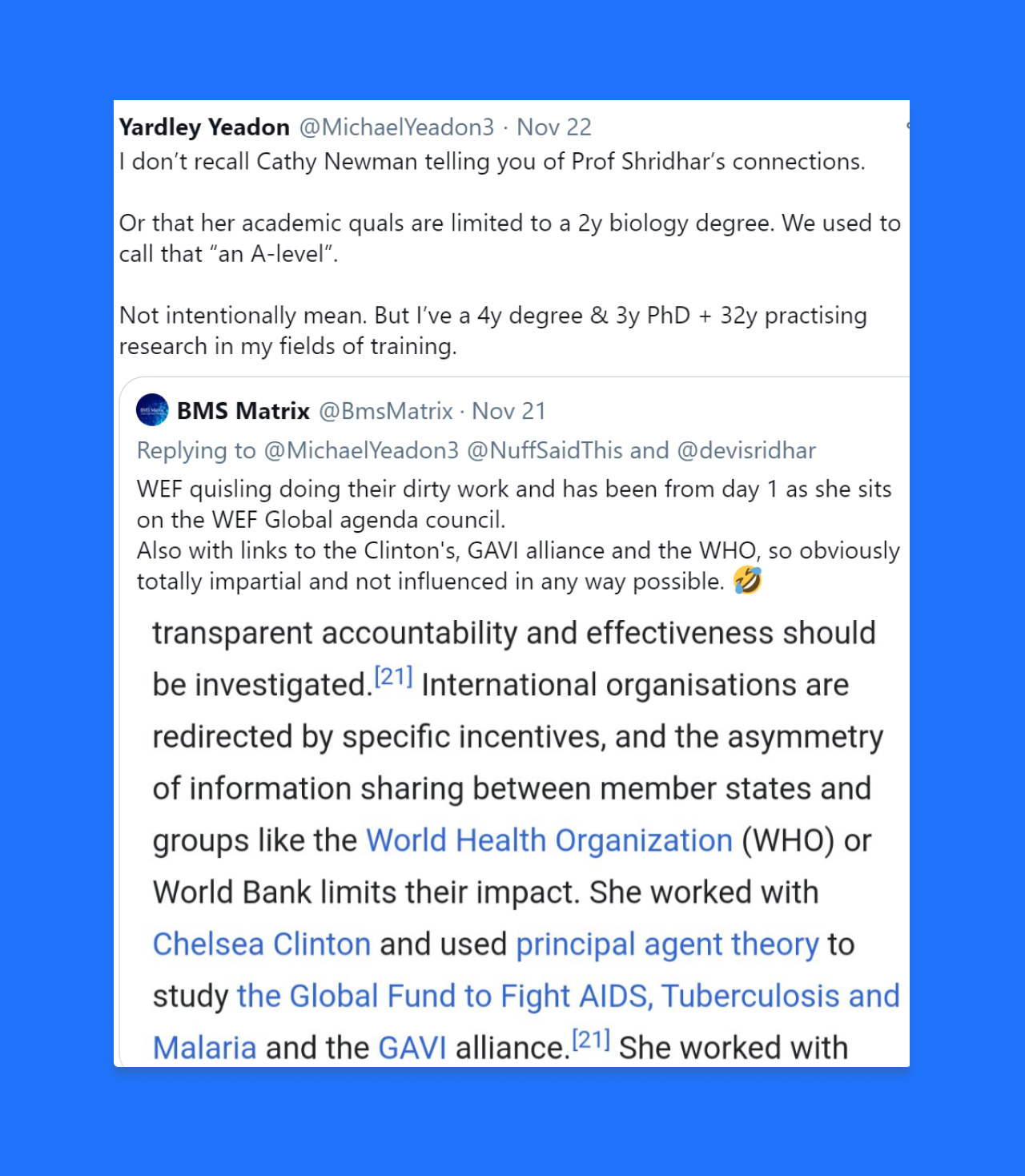 Cathy Newman is an English journalist and presenter of Channel 4 News. Channel 4 is a publicly-owned national broadcaster (originally set up by an Act of Parliament. The Channel Four Television Corporation’s board is appointed by Ofcom in agreement with the Secretary of State for Digital, Culture, Media and Sport).

As can be seen in the tweet, Mike also claimed that she has only studied biology to the equivalent of two-years advanced high-school. I don’t know and to be honest, I don’t overly care what she has or has not done.

Mike is clearly adamant that her virus avoidance advice is wrong and that she is fundamentally not qualified to be giving such advice.

What I do care about is that I’m at a total loss to make sense of Devi’s guilt tripping viral spread Christmas tweet. I’m dumbfounded.

Last time I checked (some months ago), the mortality risk was 2.5x regular flu for those 70+, 2.5x less than regular flu for children, and for the rest of us, around the same as the flu. The Infection Fatality Rate for COVID-19 is 0.05% (for those < 70), peer-reviewed, as carried in the WHO Bulletin last month! 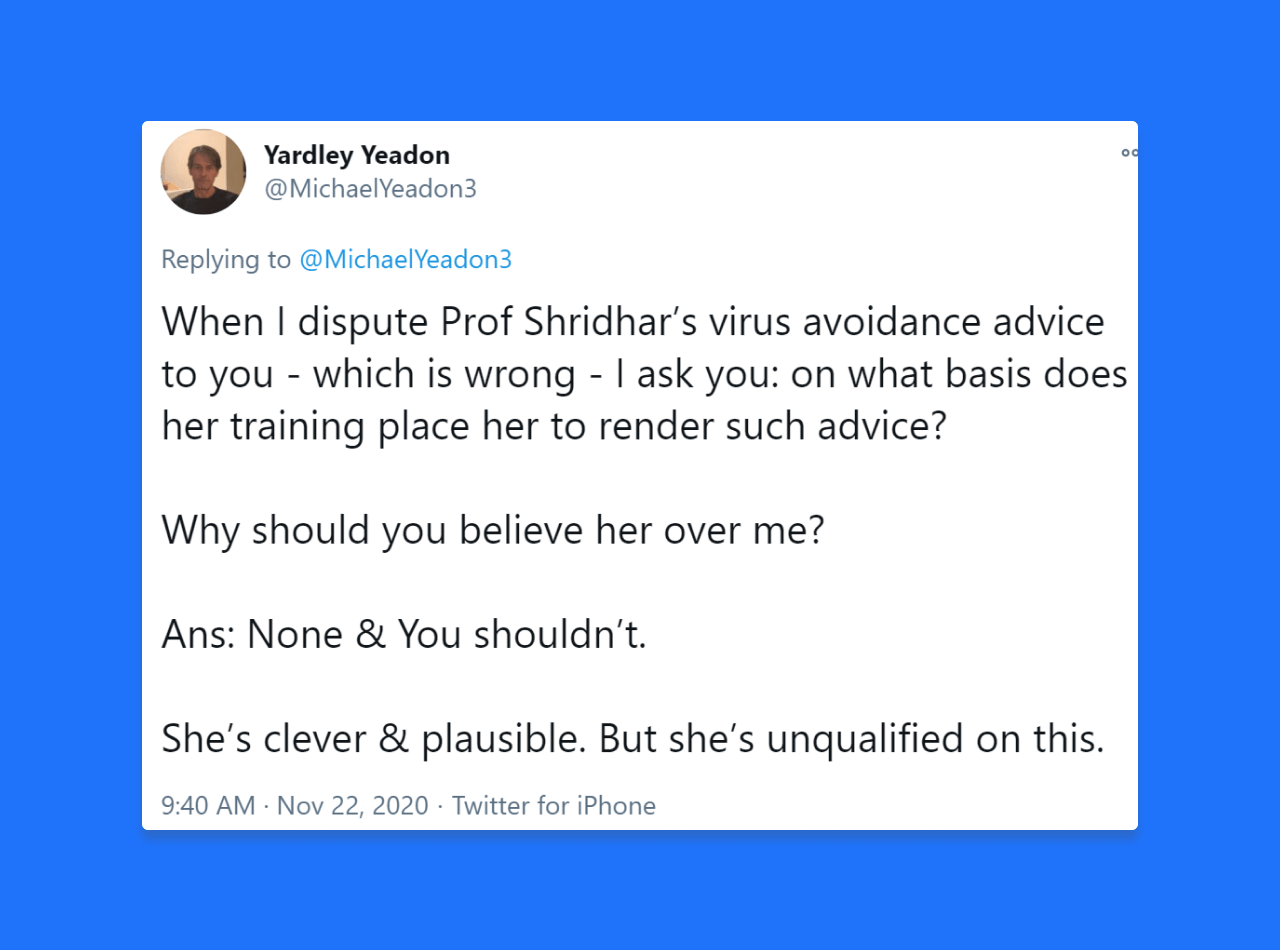 Plus I’m not convinced that asymptomatic spread is of great significance, contrary to present mainstream belief. Of course it could always turn out to be the case, but I think unlikely. So if sick, don’t go to the family Christmas celebrations! Ditto if you have the flu!

And surely if you have family members at some level of risk (e.g. 70+) they can make their own mind up as to their own personal risk management and preferences! After all, it could be their last or one of their last few remaining Christmases. 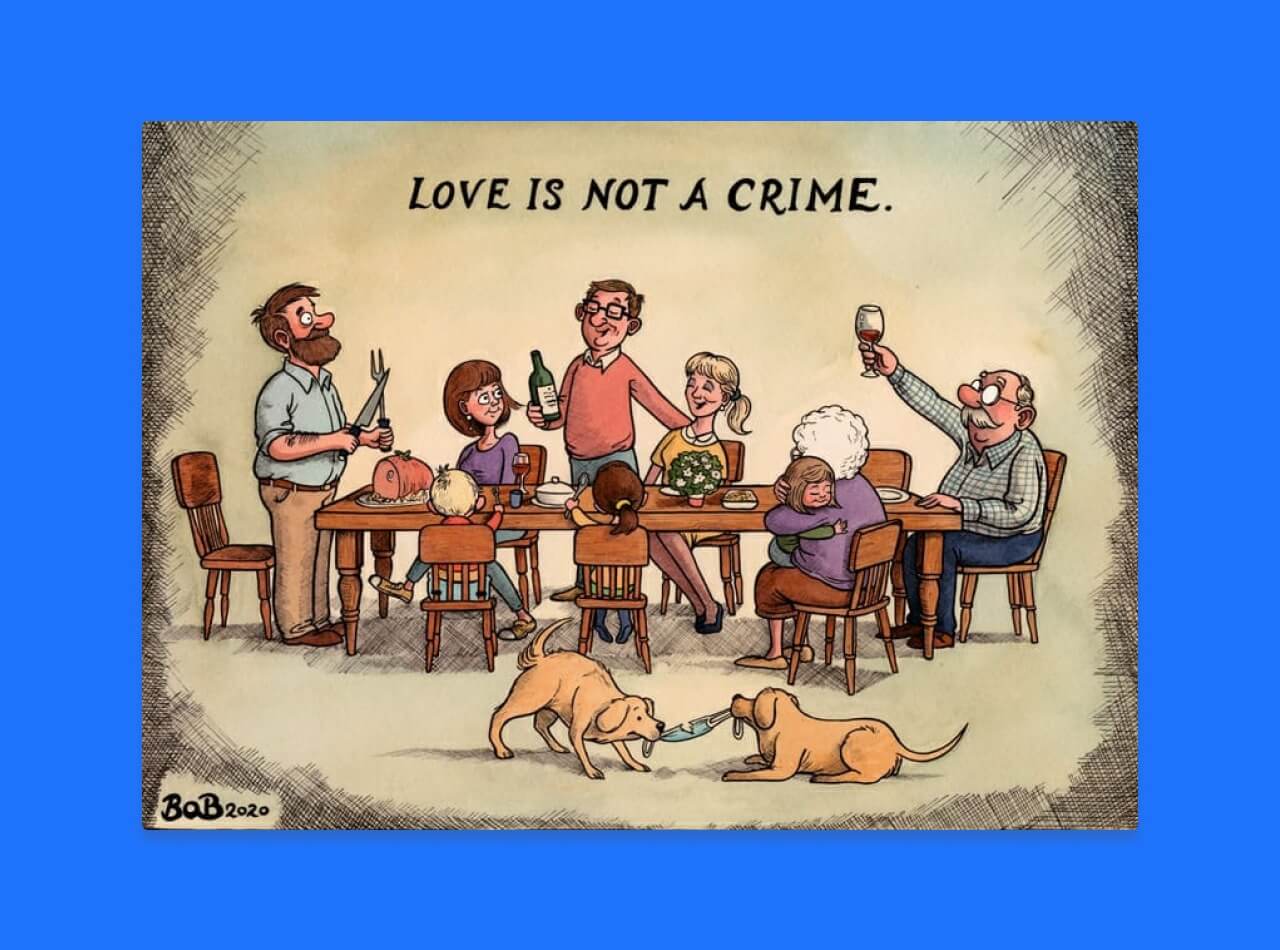 Celebrate Christmas! And take care driving, as for the majority of us, the drive to a Christmas party will be of greater risk than COVID-19.