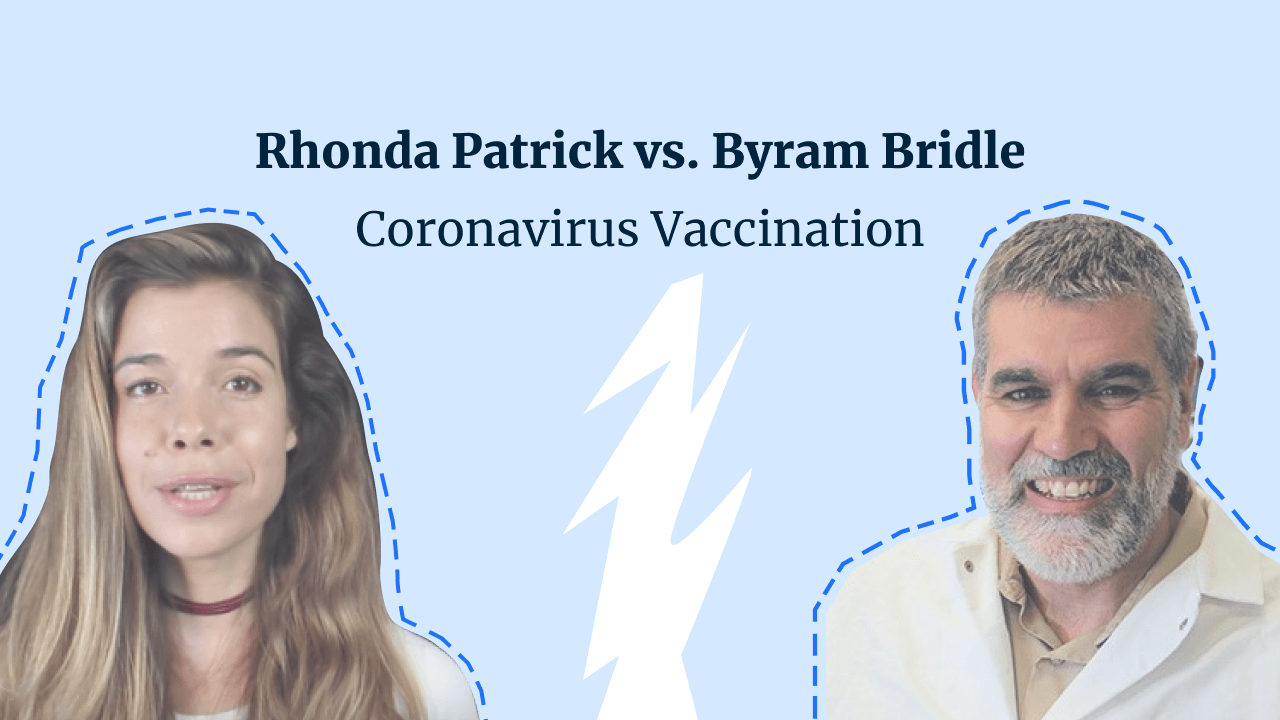 Last Saturday, Rhonda Patrick held her monthly members-only Q&A. The email invitation said that “misinformation on COVID-19 and mRNA vaccines” would be the prioritized theme, and that she’d specifically seek to address the following three questions:

I appreciate Rhonda and what she’s contributed to public awareness over many years around aging and nutrition. A favorite of mine was her coverage of “triage theory” with her former professor, the brilliant biochemist Dr. Bruce Ames.

I attended the members Q&A. It sounded like she lacked a more full complete and accurate picture, simply owing to lack of specialization. To seek further education I pinged viral immunologist Bryam Bridle. I relayed main points of the Q&A. He kindly responded in detail.

“Feel free to invite Rhonda to an open scientific discussion on the topic of the safety of COVID-19 vaccines. I would be happy to do this with a mutually agreed upon moderator on any forum that would be widely accessible to the public. If she is so certain she is right and I am wrong, this would be an ideal opportunity to quench my ‘misinformation’. I recommend forwarding this to her directly.

I have summarized all my current thinking about the vaccines in the attached guide that I wrote. I will work on turning it into a formal scientific paper.”

I’ll forward this post to Rhonda and report back on this blog if she’d like to take up Bryam’s offer. It’s all in positive spirit, healthy scientific discussion and debate.

Bryam said in his response “I have summarized all my current thinking about the vaccines in the attached guide that I wrote. I will work on turning it into a formal scientific paper.”, download here.

I’ve witnessed respected world-renowned scientists and physicians making mis-statements with regards to coronavirus, owing to their lack of specialization. If Rhonda is wrong, I applaud her for her courage in stepping forward with her thoughts.

Dr. Byram Bridle is a viral immunologist who is passionate about improving life through two avenues of research. One arm of his research program is dedicated to designing and optimizing novel biotherapies for the treatment of cancers. The goal of his research team is to harness the natural power of a patient’s immune system to eliminate their own cancer cells. This represents the ultimate personalized therapy and holds the potential to treat cancers more effectively, safely, and at lower cost than current options. The second arm of his research program focuses on studying host responses to viruses and other inflammatory stimuli. This has implications for the treatment of infectious diseases and inflammation-mediated disorders. These two programs have been unified in a unique way. The Bridle lab is harnessing their expertise in making potent cancer vaccines and combining this with their interest in anti-viral immunity to develop vaccines to protect against infectious diseases such as those caused by highly pathogenic coronaviruses. Mentoring the next generation of Canadian scientists is a responsibility that Dr. Bridle takes very seriously.

I said, “She said she got vaccinated. She said the spike protein used in the vaccine was not cytotoxic as it did not have ACE2 receptor binding, i.e. was not the same spike protein”.

“The mRNA vaccines encode what is called the ‘prefusion-stabilized spike protein’. The S1 sub-unit has the ACE2 receptor binding domain. In was shown in this study that 11 out of 13 vaccinated people had the S1 subunit is circulation: Ogata, A.F. et al. Circulating SARS-CoV-2 Vaccine Antigen Detected in the Plasma of mRNA-1273 Vaccine Recipients. Clinical Infectious Diseases (2021).

It provides proof-of-principle that not all the spike stays intact in the prefusion-stabilized form. This might be due to partial degradation of the some of the mRNAs at the transmembrane domain end, due to partial degradation in cells that undergo apoptosis, etc. Some have claimed that the concentration of the S1 subunit was too low to be of concern. However, in the study, the authors did not determine if any of the S1 was already bound to ACE2 on cells.

Also, in Canada, we defined the AstraZeneca vaccine as being too dangerous for adults at a reported rate of 1 potentially fatal blood clot per 55,000 people vaccinated. If systemic spike were the culprit, one would only expect to see high concentrations in 1 out of ~55,000 people evaluated (so what are the chances of finding this in 13 people).

Of much greater concern to me is not the free spike, but the biodistribution data that suggest the mRNA vaccines are getting delivered to a wide variety of tissues. If there is localized expression of spike on these cells (since the spike is supposed to stay on the surface of cells), these would become targets once antibodies are induced.”

I said, “She further said that the Japanese info that was widely disseminated saying the vaccine spike protein was found in ovaries etc was nonsense because the dosage used on mice was 300 to 1000x that used in humans. She said she was far more worried about the spike protein in the real virus”.

“They key to this study is that it demonstrates that only ~25-50% of the dose stays at the injection site. Would this change with the dose? I don’t think it would change this fact much. However, we won’t know unless a study is done. This is where it is frustrating. Never before has the onus been placed on scientists outside the vaccine companies to prove danger. It has always been the responsibility of the companies to prove safety. …and a lack of data regarding harm does not equal confirmation of safety.

Second, the study was done in rats, not mice. Both are a terrible model of COVID-19 since the binding affinity of the spike for mouse/rat ACE2 is at least an order of magnitude lower than for human ACE2. I believe that ACE2 in rats is of even lower affinity than mice. Neither develop COVID-19. Mice and rats are not appropriate models for studying either COVID-19 nor the safety of COVID-19 vaccines. Note that the pre-clinical fertility studies were also done in these rodent models, which would be expected to overestimate safety.

Also, the biodistribution study did not look at spike. It assessed the distribution of the lipid nanoparticles. Further, rats are not humans. One cannot say with absolute certainty that a high dose in rats rules out the possibility of safety issues with a lower dose in humans (see the comments about the affinity of binding of spike to ACE2 from different species as one example).

Finally, the point is that the biodistribution study was never done with the actual vaccine formulation, nor in appropriate animal models. Nor was any effort made to assess this in the first phase 1 trial, which is where it should have been evaluated in people. This, and the story Re: PEG (see below) suggest corners were cut to rush the vaccine into people. This may have been deemed acceptable to help the at-risk. However, it is no longer acceptable in the context of people at low risk of COVID-19, especially in the absence of pre-screening for naturally acquired immunity (which is likely the case for many people by now) that would preclude the need for vaccination, and especially for young people.

The wide distribution of mRNA vaccines throughout the body has a historical precedent, such as for immunizing against influenza for example. However, many people do not realize that lipid nanoparticles were not designed to function as vaccines. They were designed to serve as gene therapies or carry drug cargo throughout the body, including into the brain where attempts could be made to treat diseases such as Alzheimer’s disease, Parkinson’s disease, and brain cancers.

Of substantial concern is the use of PEG, which has been associated with anaphylactic shock in some people after receiving a mRNA vaccine. PEG was added to lipid nanoparticles in the early days of drug development to promote much wider distribution throughout the body. Specifically, when PEG is added to lipid nanoparticles, it helps the particles avoid being consumed by cells throughout the body, especially cells of the immune system, that would limit the distribution of the mRNA cargo.

Indeed, addition of PEG to lipid nanoparticles was hailed as a breakthrough because ‘This effect is substantially greater than that observed previously with conventional liposomes and is associated with a more than 5-fold prolongation of liposome circulation time in blood’.

In retrospect, it seems that another mistake may have been made in the rush to get these vaccines into people: Arguably, the PEG component should have been removed from the lipid nanoparticle formulation. This likely would have resulted in lipid nanoparticles with a greater tendency to remain at the injection site and be picked up by the very cells of the immune system that we want to induce an immune response.

I said “She also said that coronavirus was associated with brain shrinkage similar to dementia, in many.”

“I am very worried that the vaccines may cause dementia in some people and the symptoms may not become apparent for years (i.e. a potentially unappreciated long-term effect).”